WHAT ARE THE BEST ACID REFLUX HERBS? – REFLUX COMFORT 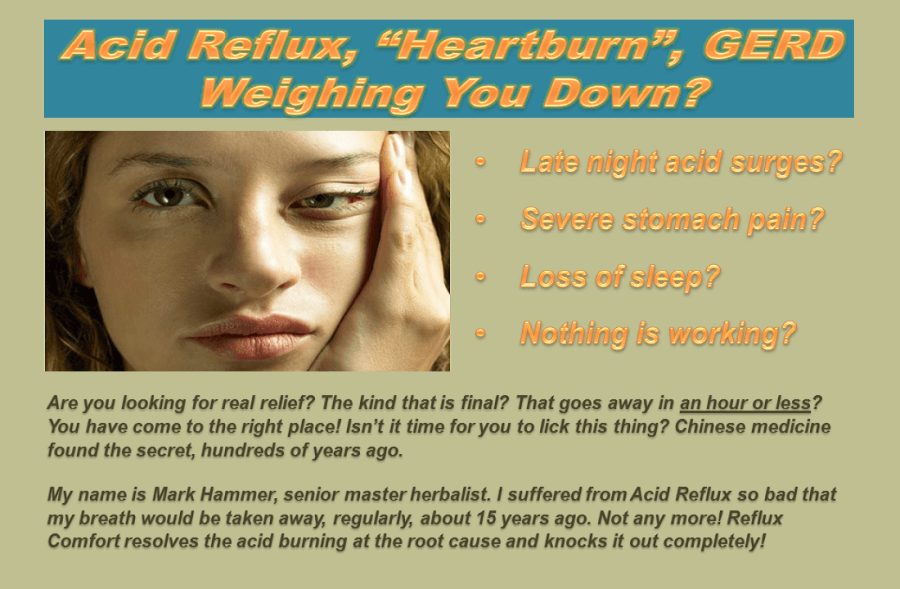 LOOK BELOW, YOU CAN FIX THIS! ONCE AND FOR ALL! 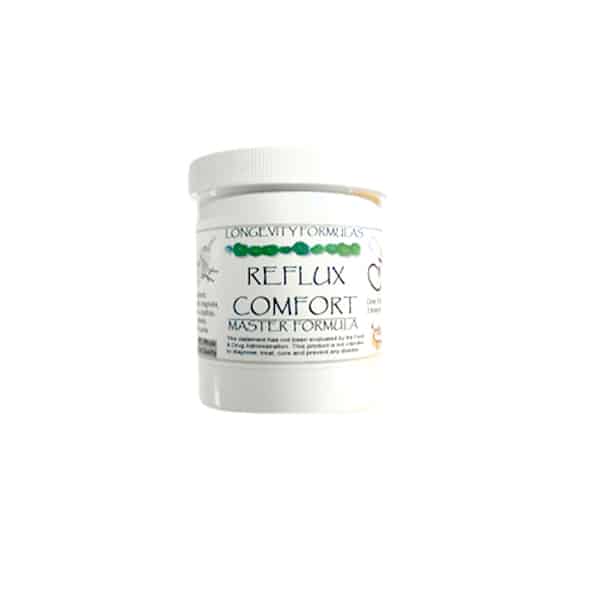 excess acid problem is a superficial
perspective and deserves a deeper look. Acid reflux herbs contained in Reflux Comfort relieve the
condition in 60 minutes or less.

I suffered from Acid Reflux for years until my mentor (Chinese Medicine Doc) explained what was really happening. It
was awful! I would stay up nights, awakened repeatedly at night with terrible burning sensations scorching my
throat. Sometimes it would literally take my breath away where my lungs would seize in desperation for just one
breath. I even wondered if one day would come where I wouldn’t be able to breathe and possibly die from this
condition. I want you to know, I know how bad it can get. Maybe this is your point in time where enough is enough!
If so then you are ready for this valuable free info, give up the “bandaids” and get final and complete relief. You
have some choices to make but, at least, you’ll have the right options before you, so, you can free yourself from
this scarring condition. You have come to the right page for answers!

This has really become a huge problem in the US. Go to the pharmacy section of any grocery store and you will find a
large selection of acid relievers you can buy. None of them eradicate and they barely soften the condition. Isn’t it
time for a permanent correction before you open the door to other serious conditions to enter? 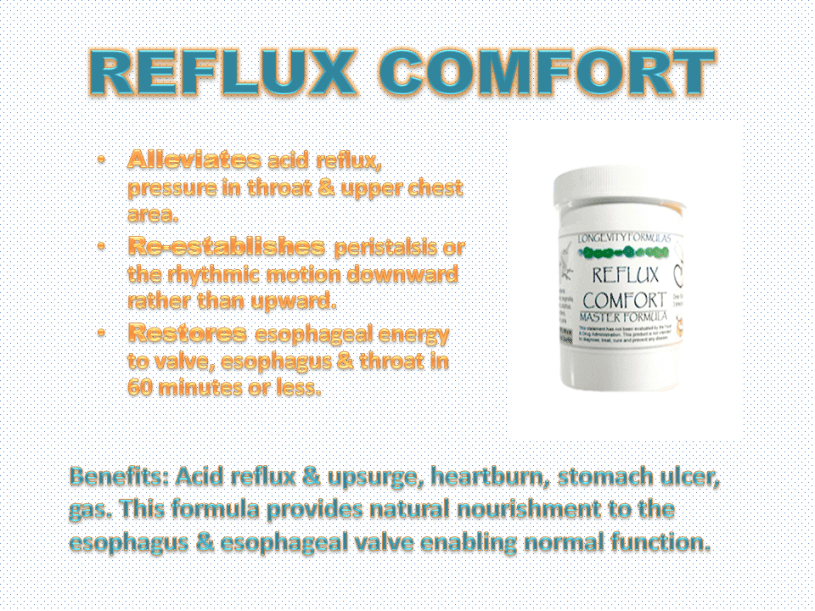 THE FIRST STEPS TO RECOVERY:

Not everyone is ready to correct their imbalance. Most are too trusting and dependent on healthcare professionals!

HERE ARE THE NEXT STEPS ESSENTIAL TO YOUR RECOVERY:

Understand acid reflux is common and is a very serious problem.

Grasp that too many people assume that because others suffer from it that it isn’t a serious ailment. The longer you allow reflux to continue, the more likely you are to suffer serious damage. Acid reflux pain is the way your body is announcing, loud and clear, “You have a physical problem requiring your immediate attention”.

You are ready to take responsibility for your condition.
You choose to confront yourself relative to your choices that have contributed to your condition. You have proactively chosen to take action after listening to various therapeutic opinions. You know you are ready for a change to a permanent state of well-being.

You have decided to correct the problem at the root.

You have sorted out the regimens that only put a “bandaid” on the problem. While over-the-counter medications or prescription medications suppress the process of acid production (symptom) you have chosen to resolve the underlying cause so the condition doesn’t surface again. You will find, on these pages, there are plenty of ways in which you can resolve your acid reflux problems, once and for all.

“A sense of humor is good for you. Have you ever heard of a laughing hyena with heartburn?”— Comedian, Bob Hope

Your body’s reaction to what you are subjecting it to, is the best your body can do, until some changes are made. The Reflux condition, sometimes called, “heart burn”, is simply a weakened energy state due to a variety of underlying causes. Get at the source of this weakened state and the burning sensation will leave forever. Most people assume that there is an over production of stomach acid while many professional practitioners think the condition is due to under-production of acid. However, I am proposing that the condition is due to: 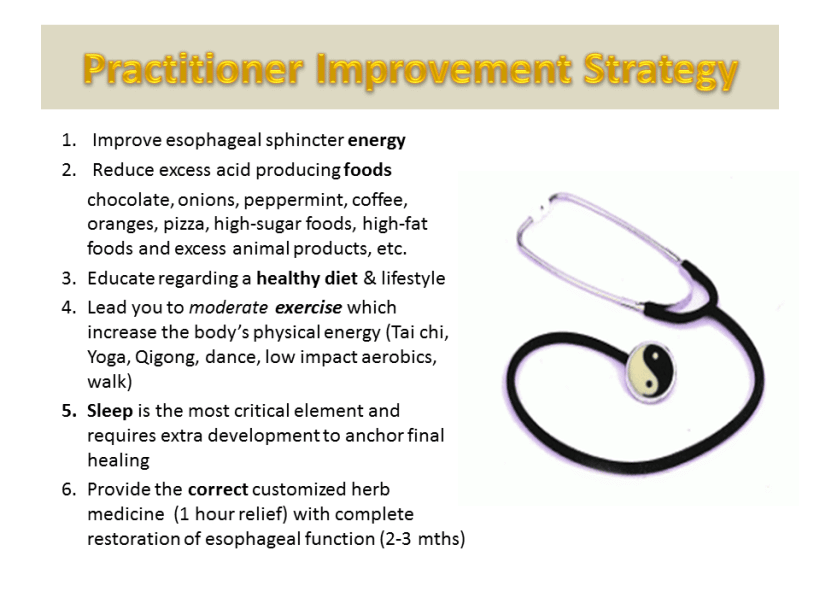 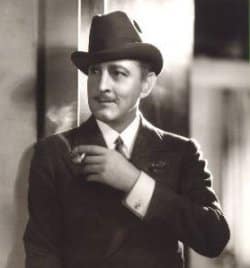 “I would like to find a stew that will give me heartburn immediately, instead of at three o’clock in the morning.”  John Barrymore, Stage & Film Actor (1882-1942)

ACID REFLUX: WHAT IS IT & WHAT CONTRIBUTES TO IT?

Do You Have Reflux Or A More Serious Condition? What conditions do you have?

Reflux is Caused by an Abnormal Esophagus 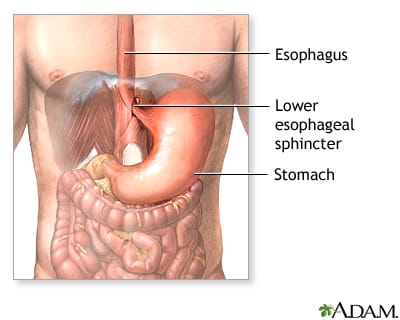 The flow of ingested food and fluid between your esophagus and stomach is regulated by a valve called the lower esophageal sphincter. In healthy people, this valve helps prevent stomach acid or digested food from flowing back up into the esophagus. In patients with acid reflux, this valve does not close properly due to weak muscle contraction. This abnormal valve function allows acid from the stomach to escape and rise into the esophagus, causing the conditions associated with acid reflux.

Acid Reflux is Not Just Heartburn

Heartburn is a common condition that causes sensations of burning or pain to occur in the esophagus. People with acid reflux condition are often misdiagnosed with mild or occasional heartburn. Acid reflux differs from heartburn in that conditions persist for two or more days each week, even after a patient has altered his lifestyle and diet. Though heartburn is one condition of acid reflux imbalance, it is not the only one.

If you smoke cigarettes, you may experience an increase in acid reflux. The smoke that you inhale from a cigarette relaxes the esophageal valve that separates your esophagus and stomach. If you have the acid reflux condition, this valve functions abnormally–a condition that is worseneded by cigarette smoke.

Obesity and Pregnancy Increase the Risk of Acid Reflux

Excess weight around the abdomen due to obesity or pregnancy causes increased pressure on your stomach, which can elevate your risk of developing acid reflux syndrome. About 25% of all pregnant women suffer from acid reflux, daily. This increases 50% during the last trimester as the baby grows.

Infants and children can also develop this condition–though most typically outgrow the disease during early childhood. Symptoms of acid reflux in children and infants include recurrent vomiting, coughing or respiratory problems.

If left untreated, acid reflux can cause erosive esophagitis–a medical condition characterized by severe damage to the tissue lining the esophagus. Approximately one-third of patients with acid reflux disease may go on to develop erosive esophagitis, report health professionals. When the condition proceeds to this stage, your doctor needs to be contacted, immediately.

Mental Health: 80% of sufferers experience the symptoms at night, causing 75% to wake (2 hrs.). This results in many problems during the day, including:

Alcohol relaxes the lower esophageal sphincter muscle. When this muscle is not operating properly, it’s one of the leading causes of acid reflux.

Youth: Approximately 15% of all infants and young children suffer from reflux.

Target Population: 65% of all reflux sufferers are in their 40’s or older.

Approximately 20% of those individuals that suffer from acid reflux will develop GERD where more serious health concerns may develop such as: 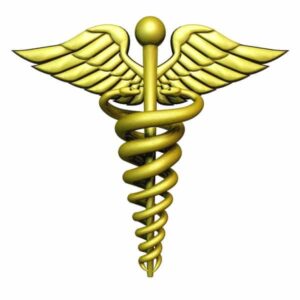 Conventional medicine considers heartburn to be incurable. Why is that?

Ready to see the best eradicating formula and ingredients in all of herbal medicine, here you go….
Click Here!

If you are pregnant or breastfeeding, consult your health care professional before using this product.

These statements have not been evaluated by the FDA. This product is a dietary supplement and is not intended to diagnose, cure, prevent or treat any diseases. The information here is not provided by medical (allopathic) professionals and is not intended as a substitute for medical advice. Please consult your physician before beginning any course of treatment. However, billions of people have used these products without complication. These herbal formulas have been used in conjunction with allopathic medical regimen, successfully without interference in the restorative process.